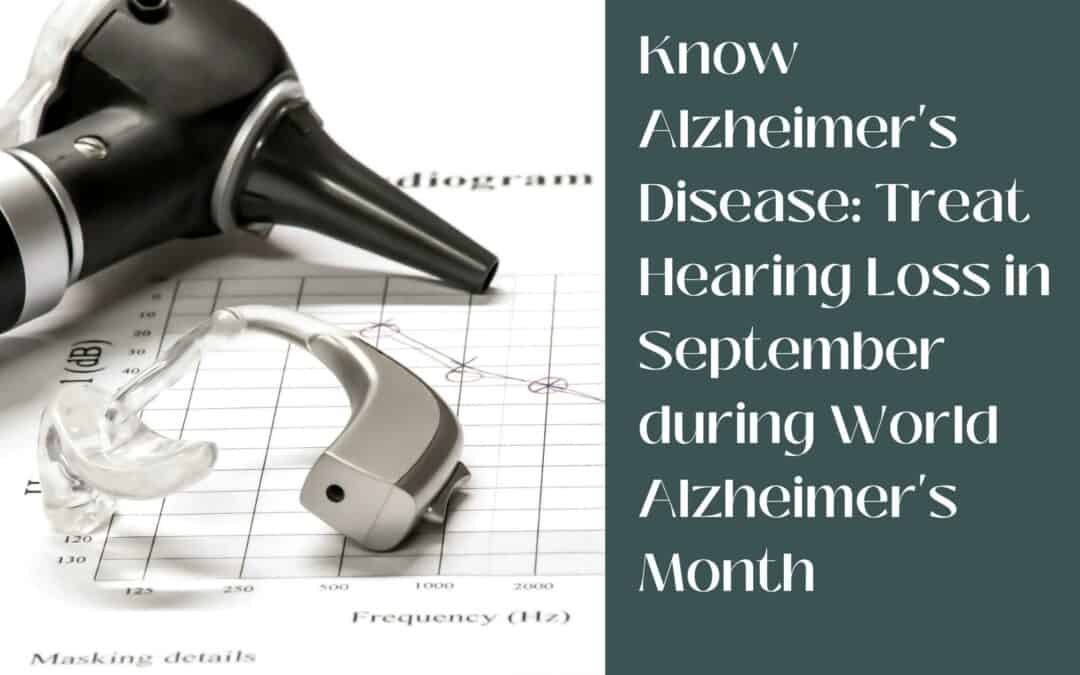 Prioritize your hearing health during World Alzheimer’s Month by taking a hearing test! Treating hearing loss can reduce your risk of developing Alzheimer’s disease, a permanent medical condition that impacts 50 million people worldwide. Alzheimer’s is the most common type of dementia – a group of neurological conditions that lead to declining cognitive functions like memory, decision making, learning, and thinking. Accounting for up to 90% of all dementia that is experienced today, Alzheimer’s is an incurable disease that does not have identifiable causes. Identifying and addressing risk factors is a useful strategy that is emphasized to maintain brain health and prevent (or delay) cognitive decline. Treating hearing loss is an effective intervention that reduces the risk of Alzheimer’s.

Alzheimer’s typically starts with subtle memory loss and progressively deteriorates cognitive functions resulting in an inability to recognize others, make decisions, complete tasks, and in later stages; navigate and function independently. People could require daily assistance and regular care to ensure their safety. Experts do not know yet what causes Alzheimer’s and suggest that it is likely not due to a single cause but rather, several factors that impact people differently. There is increased research that identifies risk factors and healthy behaviors that could reduce the risk of cognitive decline. This includes hearing loss, another permanent condition which affects brain health.

Age is the strongest indicator for both Alzheimer’s disease and hearing loss:

Extensive research examines this overlap between both conditions and shows that hearing loss can increase the risk of cognitive decline. This includes a significant study conducted by researchers at Brigham and Women’s Hospital and Harvard Medical School. Published in 2019 in the Journal of Alzheimer’s and Dementia, the study involved over 10,000 participants (ages 62 and older). Researchers studies their cognitive and hearing capacities over an 8-year period and found that cognitive decline was:

These findings highlight the substantial correlation between hearing loss and cognitive decline. Researchers suggest that hearing loss also happens in the brain, meaning that the areas of the brain responsible for understanding and processing sound become less active. This effectus neural networks and reduces cognitive function, contributing to decline and the development of conditions like Alzehimer’s.

Treating hearing loss is a critical and effective way to protect both hearing and brain health. Fortunately there are useful ways that hearing loss is treated, the most common being with hearing aids. Hearing aids are electronic devices that are savvy pieces of technology, designed to absorb and process sound. This provides the ears and brain with significant support which alleviates hearing loss symptoms that strain communication. This enables people to hear with greater capacity and clarity and well as communicate more effectively.

Research shows that not only does this maximize hearing in all environments, but it also strengthens brain health. This includes a 2020 study published in Science Daily. A team of researchers at the University of Melbourne assessed how hearing aids impact the brain. Researchers evaluated the hearing and cognitive abilities of close to 100 participants (ages 62-82) before using hearing aids as well as 18 months after using hearing aids. The key finding included:

Treating hearing loss offers countless benefits that can enhance all aspects of life. This includes strengthening communication, improving relationships, enriching social life, and bettering overall health. World Alzheimer’s Month is a great time to commit to your hearing health. You can start with the simple step of scheduling an appointment for a hearing exam with us! Contact us today.

Videonystagmography “V” using video and an infrared camera, “N” nystagmus or involuntary eye movements, “G” to graph measurements. The use of video goggles accurately documents eye movement using infrared signals. With this technology we can not only measure the eye movements, but we can see them and capture video of their movement.

Your eye movements are directly related to what your inner ear (semicircular canals) is doing. They are the window into the function of the balance system. During the test you will be asked to follow a light with your eyes while the movements of your eyes are being monitored. Then you will be moved in different simple body positions to determine if your balance system is responding normally. Finally the audiologist will present cool and warm air to your ear canals. This will give you a sensation of spinning for a short time while your eye movements are being recorded. This test helps us to determine how well your vestibular systems are functioning. The audiologist will analyze the test and send the results to the referring physician for review.

Auditory Brainstem Response is an test that allows us to verify the integrity of your 8th cranial nerve, the auditory-vestibular nerve. During this examination, electrodes will be affixed to the skin on the forehead and behind each ear. You will lie comfortably on the exam table and hear loud clicking sounds. There is no response required from you. The audiologist will be obtaining valuable information regarding the status of your 8th nerve on each side and will send the results to your referring physician for review.

Positional vertigo is the most common, and most misdiagnosed, form of true spinning vertigo. Particles in the vestibular system called otoliths (or “crystals”) become dislodged and enter another portion of the vestibular organ. This causes brief true spinning vertigo that occurs with head and body positional changes. The treatment for benign paroxysmal positional vertigo, BPPV, is a simple series of head and body positions performed by the doctor of Audiology. It is important that we can verify the side and location of the dislodged particles to utilize the correct repositioning treatment for you. The procedure only takes a few minutes to complete and most patients only require one treatment to completely resolve their positional vertigo. Unfortunately, this procedure is not covered by insurance when the audiologist performs it, so there is an out of pocket expense.

The vestibular evoked myogenic potential (VEMP) is a diagnostic test used to evaluate the health of specific balance organs and associated nerves. It is usually used in a battery of other tests (VNG, ECOG, ABR and/or a hearing test) to determine where your dizziness may be coming from. This test is completed by recording and measuring muscle responses from the neck or just below the eye while a loud clicking sound is played in the ears. Even if your hearing loss prohibits you from hearing the test sound, normal responses can be recorded. The tester will clean the skin of your neck, forehead, sternum (chest) and under the eyes. Small surface electrodes will be affixed to the skin in these areas. Earphones will be placed in each ear canal. You will lie comfortably on the exam table and turn and raise your head while the sound is played in the ear for up to a minute at a time. In addition, you may be asked to focus your eyes upward on a specified location while the sound is being played in the ear. The computer will record several responses from each ear. The audiologist will analyze the test and send the results to the referring physician for review.